The origins of karate go way back to the travels of the ancient Buddhist Monks throughout Asia. Unarmed and oppressed, it became necessary for them to develop and implement a weaponless form of self defense for their own safety and survival.

One of the first known techniques, called 'Dai Palm' (or 'death touch', now known commonly as 'teisho' or 'heal palm smash') was developed and taught to the ancient Buddhist Monks to fend off and defend themselves from would-be thieves and criminals, leaving their attackers dead of a heart attack.

For many years, these techniques were confined to the ancient Buddhist communities.

In 1477, the three kingdoms of Okinawa were unified, and the ruler, King Sho Shin, outlawed the use of weapons in all of Okinawa.

It was because of this that unarmed combat flourished.

The history of Goju Karate is attributed heavily to two individuals, Chojun Myagi and Gogen Yamaguchi.

Chojun Myagi combined and blended his Native Naha-Te, with Shaolin and Pa Kua styles to form 'Goju-ryu' (Hard and Soft Style) and Gogen Yamaguchi formalising the system and spreading Goju to the world ....

Chojun Miyagi, born April 25, 1888. was an Okinawan Martial Artist who founded the Goju-ryu school of karate..

Myagi Was born in Higashini, Naha, Okinowa. He began his study in karate-do at the age of nine(9). He first leaned martial arts from Ryuko Aragaki, who then introduced him to Hanro Higashionna when Myagi was fourteen(14). Under his tutelage, Myagi underwent a very long and arduous period of training. His training with Higashionna was interupted for a two year period while Myagi completed his military service, 1910 through 1912, in Mayakonojo, Miyazaki Ken.

In 1915, after the death of Kanryo Higashionna, Myagi traveled to Fujian Provance. In China he studied the Shaolin and Pa Kua (Ba gua) forms of Chinese boxing. From the blending of these systems, the hard linear/external form of Shaolin, the soft circular/internal form of Pa Kua, and his Native Naha-Te, a new system emerged, however, it was not until 1929 that Chojun Myagi named the system Guju-ryu, meaning "Hard Soft Style".

After some years in China, Chojun Myagi returned to Naha where he opened a dojo (training hall). He taught for many years, gaining an enormous reputation as a karateka. Despite his reputation, his greatest achievements lie in popularization and the organisation of karate teaching methods. He introduced karate into Okinowa police work, high schools and other fields of society. He revised and further developed Sanchin - the hard aspect of Goju, and created Tensho - the soft aspect of Goju. These kata are considered to contain the essence of Goju-ryu. The highest kata, Suparinpei is said to contain the full sylibus of Goju-ryu. Shisochin was Myagi's favourite kata. 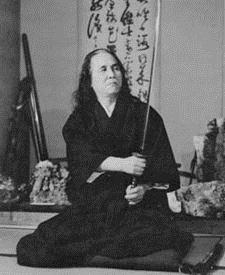 Gogen Yamaguchi, also known famously as 'the Cat', born January 20 in 1909, was a world renown Grand Master of Japanese Karate-do and founder of the International Karate-do Goju-kai Association. He was one of the greatest known Karate-do masters to come out of Japan. Prior to his death he was decorated by the Emperor of Japan in 1968 with the Ranju-Houshou (translation - Blue Ribbon Medal) and the fifth order of merit, for his enourmous contribution to the world wide spread of Japanese martial arts. For many years Gogen Yamaguchi was listed in the Guiness Book of Records regarding his rank and achievements.

Gogen's early Years. Gogen Yamaguchi was born in Miyakonojo Shonai, Miyazaki Prefecture, Japan near Kagoshima City on the island of Kyushu. In the fifth year of primary school, Yamagichi comenced his karate-do training under the guidance of Sensei Takeo Maruta. Maruta Sensei was a Goju-ryu practicioner, and was a student himself to the legendary Chojun Myagi.

In 1934, Gogen Yamaguchi graduated from Ritsumeikan University in Kyoto, after studying Law, and it was in that year that he introduced Jiyu-kumite (which is known today as sport and tournament kumite).

In 1935 he officially formed the All Japan Karate-do Goju-kai Karate-do Association (later splitting into the JKF Gojukai and the J.K.G.A). Also in 1935 Gogen began his travels with the Japanese government as an intelligence officer.

During his military tour in World War II, in 1942 Gogen was captured by the Soviet military and incarcerated as a prisoner of war in a Russian concentration camp. It was here that he battled and defeated a live tiger according to his autobiography. Gogen Yamaguchi was orignally targeted for hard labour on the POW camp, however he impressed the Russian soldiers when they discovered who he was and was requested to teach karate-do to the Russian soldiers. It was then that 'the prisoner became the master of the guards, who became his students'.

In 1945, Gogen returned to Japan where he re-opened his initial karate-do dojo in Nippori, and advertised with a sign outside reading 'Goju-ryu-kai'. He moved at a later date to the Suginama-ku area of Tokyo and it was at this time that he forestered the name 'Goju-ryu' formely with the Butoku-kai (the official government body and Headquarters for the Japanese Martial Arts). Here he quickly expanded throughout a network of independent Goju-ryu dojo's. The rapid growth and expansion was reinforced by Gogen's energetic and forceful persona which resulted in a worldwide network of karate schools which he alone built into a powerful martial arts empire.

Later in 1964, Gogen Yamaguchi along with other founding members, unified all the karate dojo's in Japan to form the All Japan Karate-do Federation, which still exists today as the Japan Karate Federation (JKF).

By 1966, Gogen Yamaguchi's organisation comprised more than 1,200 dojo's and club's and 600,000 members within the Goju-ryu system. He also added to the Goju system the Taikyoku forms - training methods for the beginner students to prepare them for more advanced kata.

In 1970 and then again in 1972, Gogen Yamaguchi visited Sydney and Melbourne.

In 2008, there were approxametely 60 to 70 countries teaching Goju principles and training methods.

Try our 'Intro Program' and begin your karate journey....

Check out out class timetable and find a session.